Where we got our Name 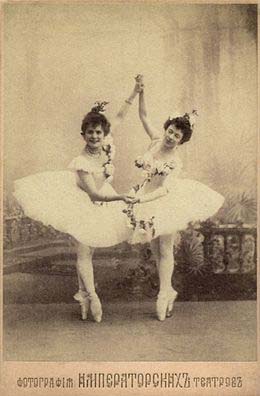 Pierina Legnani (left) – the first ballerina ever to be titled as Prima ballerina assoluta – with the Prima ballerina Olga Preobrajenskaya (right). They are costumed for the roles of Medora and Gulnare in the scene Le jardin animé from Marius Petipa’s final revival of Le_Corsaire for the Imperial Ballet. St. Petersburg, 1899.

Ballerina étoile (French, star). The highest rank of dancer at the Paris Opera.

A ballerina (Italian for female dancer) is a title used to describe a principal female professional ballet dancer in a large company; the male equivalent to this title is danseur (French) or ballerino (Italian). Although the term ballerina is now commonly used informally to describe any female ballet dancer, it was once a rank given only to the most exceptional female soloists. The opera singer informal equivalent is diva. More or less, depending on the source, the rankings for women, from highest to lowest, used to be:

For men, the ranks were:

Today, ballet companies continue to rank their dancers in hierarchical fashion, although most have adopted a sex neutral classification system, and very few recognise a single leading dancer. In most large companies, there are usually several leading dancers of each sex, titled Principal Dancer or Étoile to reflect their seniority within the company. Other common rankings include those of Corps de Ballet and Soloist. The title of Prima Ballerina Assoluta is rarely used, and it is usually reserved as a mark of respect for an internationally renowned dancer who has had a highly notable career. Dancers who are identified as a Guest Artist, are usually those who have achieved a high rank with their company, and have subsequently been engaged to dance with other ballet companies around the world, normally performing the lead role.

The title or rank of prima ballerina assoluta was originally inspired by the Italian ballet masters of the early and was bestowed on a ballerina who was considered to be exceptionally talented, above the standard of other leading ballerinas. The title is very rarely used today and recent uses have typically been symbolic, in recognition of a notable career and as a result, it is commonly viewed as an honor rather than an active rank.

Quoted from; Wikipedia, the free encyclopedia